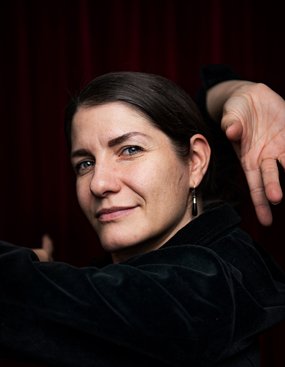 Cutting edge experimental concepts and tradition combined in one.

Pia is a freelance dancer and choreographer with flamenco as her speciality.

She also often acts as a co-producer in different works/performances and is the driving force of the Stockholm flamencohub FlamencoFredag.

Pia believes in the true and direct expression of flamenco and is convinced of flamencos strengths as an universal art form. She is credited for her "aire" and nerv as a dancer, her work often characterized by a close co-operation with musicians and different art forms. Her interest in the musicality of flamenco as a percussive and reactive danceform has taken her to exiting cooperations combining electroacoustic music, looping techniques and cooperations with Finnish singer Anna Fält, artist Annika Heed and experience designer Jan Carleklev to name a few.

As a three-year-old Pia was absorbed by flamenco in Granada and declared that she when she grew up, she would be a flamenco dancer! After years of dance classes with Anneli Uronen in Helsinki at an early age, she studied dance pedagogics at the University of Dance and Circus in Stockholm (DoCH), flamenco, choreography and spanish dances at Conservatorio Superior de Danza de Malaga, and still continually attends flamencoclasses and workshops in Spain, Sweden, Finland and wherever she happens to be.

She has studied for a great number of maestr@s with Olga Pericet, Marco Flores, Rocio Molina, Israel Galvan, Rafael Estevez, Rafaela Carrasco, Ruben Olmo and Belen Maya leaving permanent traces in her body along with some wonderful teachers in classical ballet like Iskra Ring and percussive dancers like Heather Cornell broadening her views.

Now the dancer is touring with Carmen Recycled, a show created as the dance production of the year at Scenkonst Sörmland 2021, The House of 4 Winds as well as touring with more traditional flamenco with Aire Flamenco, Ay Tarara, Tablao Movíl and others. She is also entwined in an exiting space specific project with working name ECHO initiated by guitarrist and composer Afra Rubino, labbing in Flamenco Movíl: Situation och känsla as well as working with courses and residencies in the Sörmland region in Sweden.

When not on the road or teaching, she is in the studio working on new material for exiting new projects as well as planning ahead for the productions to come! Through her company LP Flamenco, she has cooperated with swedish organisations such as Dans i Norr/Norrbottenmusiken in the northernmost north, Scenkonst Sörmland, Västmanlandsmusiken, Dans i Stan and Länsmusiken in Stockholm, Musik i Syd etc.

Pia is the artistic director and driving force behind series of monthly flamenco-fridays in Stockholm since 2015. FlamencoFredag has become an important platform for flamenco that strives to show both more traditional tablao-style flamenco as well contemporary, artist specific work presenting artists both Nordic as well as international artists. 2018 FlamencoFredag was granted "Årets Arrangör", the stage or organizer of the year award at the national Folk- och Världsmusikgalan! Read more about FlamencoFredag here!

Pia's co-operation with Finnish singer Anna Fält and the production ¡RÅ! was nominated for "Årets Tvärspel" - "co-operation beyond borders of the year" - at Folk- och Världsmusikgalan 2015. She was also the first percussive dancer to be admitted as a part of Musikcentrum.

She has been granted artist recidency at SITE Sweden - a great honour and possibility to deepen her work and proud receiver of the Stockholm City Culture Scholarship award 2016 for her work within the dance field. 2017 she was chosen as a resident artist at Vitlycke centre of performing arts. Her work is supported by the City of Stockholm, Region Stockholm, The Swedish Art Councel, The Swedish Art Grants Commity, the Nordic Culture Point as well as Helge Ax:son Johnson trust and Längmanska Cultur Trust.,

Pia teaches people of all levels and ages, works as dancer/choreographer in both traditional productions, theatre and more experimental constellations with various musicians, artists and directors both on and off stage, as well as co-producing flamencorelated projects. She teaches continually in the small town Laxne, with week-end courses in Stockholm, gives private classes and appears as a guest teacher on festivals (such as Helsinki Flamenco Festival, Tampere Flamenco Festival, Stockholm Tap Festival and Sundsvall Guitar Festival) and schools in Sweden and abroad spreading the word on flamenco.

Said about Pia and her amazing colleagues:

"Most spectacular was the performance by Finnish Anna Fält and Pia Pohjakallio..."

"I want to nominate flamenco dancer Pia Pohjakallio for Artist of the Year.

With natural scenic presence and a driving force beyond the ordinary Pia explores flamenco as an art form beyond burdening clichés. During 2012, we have been able to see her in performances for both children and grownups... A strong voice in contemporary dance context! "

Artist of the Year Award

"...Her feet did real drum solos and it is impossible to understand how anyone can patter so quickly with the heels. Sometimes it was as if we heard the exact same motion, same mood, in the guitar as we saw in the dance. Vision and hearing became one. Flamenco heat, power and emotional intensity make it an experience. Especially when it is done so competently and with such charisma that here."

"Urban Orchestra" was the awesome spectacle that opened the second semifinal of the Eurovision Song Contest 2013 in Malmö. Definitely one of the most beautiful and impressive musical numbers we've been enjoying in the history of the Festival..."

"What kind of being are you, really? I feel blessed having experienced this in my life." 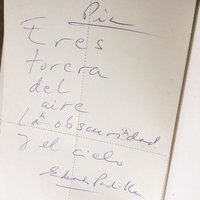